Reviews of an Augmented Reality App, RealMagic, and More 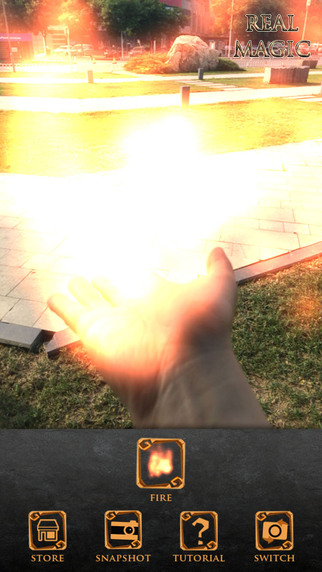 Today my previous HCI mentor in MSRA, Xiang Cao, published their new Augmented Reality iOS App called RealMagic, which can be downloaded on the App Store.

The main idea of this app is very simple but fascinating: cast magic with your own hand! Though this app is still at an early stage, we can already foresee the terrific madness among social networks 🙂 (The initial advertisement might be the most challenging part for any startups) For now, this app provides fire, ice, rainbow, dark particle effects. I guess the rendering position is based on optical flow (or a simplified version) as well as skin color model.

As for the future work, I suggest the developers to come up with more vivid particle effects (refer to Fruit Ninja, and this fire shader); background replacement might be another interesting direction to deal with.

However, this idea is not new. In IEEE VR 2013 & ISMAR 2011, Weir et al. presented BurnAR (click for paper), which uses a Head Mouted Display (HMD) and presents the design, implementation, and evaluation of BurnAR, a novel demonstration which enables users to experience the illusion of seeing their own hands burning, which we achieve by overlaying virtual flames and smoke on their hands. Surprisingly, some users reported an involuntary warming sensation of their hands. Here is their video:

The future of Augmented Reality is endless. There are already several splendid augmented reality app on the market. For example: